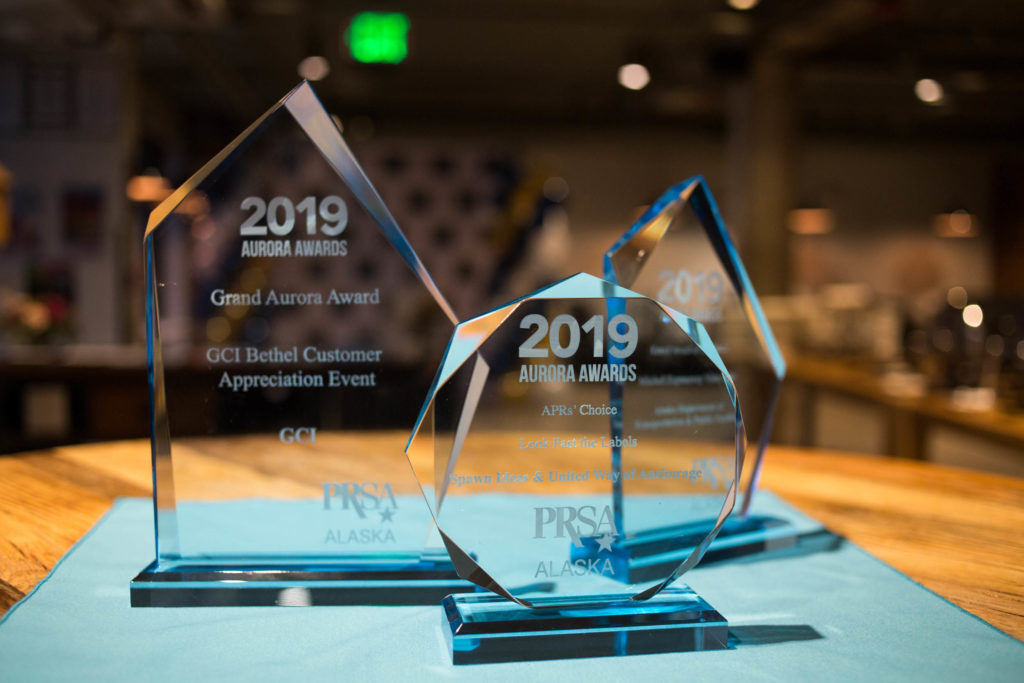 PRSA proclaims that the essential components of public relations are research, planning, execution and evaluation. The annual Aurora Awards recognize Alaska-based individuals and teams who best execute those components in their diverse work across the state. Entries are judged by PRSA members from outside Alaska – this year by the Southeast Wisconsin chapter.

Grand Award of Excellence – recognizing an exemplary tactic or tool

Advocacy group Herring Protectors asked for a compelling and educational way to convey the relationship between subsistence harvest of herring and Sitka’s herring fishery. Element Agency worked to create ‘Yaa at woone,’ Alaska’s first made-for-social media video mini-series that tells the story of Sitka’s herring. The video proved to be a successful tool with wide reach and engagement on social media.

Asking Anchorage voters to support a five percent alcohol tax when they had turned it down the year before would prove challenging even during the best of times. Throw in a pandemic and the resulting economic hardship – the uphill battle was even steeper. Yes for a Safe, Healthy Anchorage launched at the end of January 2020. Yuit Communications and Northern Compass Group had about eight weeks to convince voters Prop. 13 would benefit our community. It passed by 1,700 votes.

The APRs’ Choice Award provides the opportunity for Alaska’s public relations professionals holding the Accreditation in Public Relations (APR) designation to vote for their favorite campaign, a twist on a People’s Choice Award. United Way of Anchorage, in partnership with Alaska Community Foundation, initiated the coronavirus response fund that became the AK Can Do campaign. This crisis communications effort went statewide with an integrated marketing/PR campaign to urge donors to help through the neighbor-to-neighbor fund or a fund to support nonprofits on the front line of the virus crisis. Spawn Ideas donated all time to develop and place the highly successful campaign that has raised more than $2.5million.

Beth Rue, marketing and communications manager for NANA, was honored with the Bruce Pozzi Chapter Service Award. The award is given to a member whose service to the Alaska Chapter has been significantly above and beyond expectations during the previous year(s) of service. The award is named for the chapter’s first president, Bruce Pozzi, APR, Fellow PRSA. Rue was recognized for consistently stepping forward to support efforts to advance the public relations profession in Alaska.

Bruce Pozzi, APR, Fellow PRSA, was awarded a lifetime membership to PRSA and the Alaska Chapter. Pozzi has been a PRSA member since 1971, founded the Alaska Chapter in 1977 and was the first Alaskan inducted in the College of Fellows. He’s also the first Alaskan to earn a Silver Anvil, which recognizes outstanding public relations programs nationwide; he has earned this award twice. Pozzi has served as a mentor to many practitioners, both in Alaska and across the country. PRSA Alaska is proud to honor Pozzi with the associations’ first-ever lifetime membership.

First place awards were presented in the following categories:

Awards of Excellence – tactics and tools