Award-winning PR campaigns on a budget 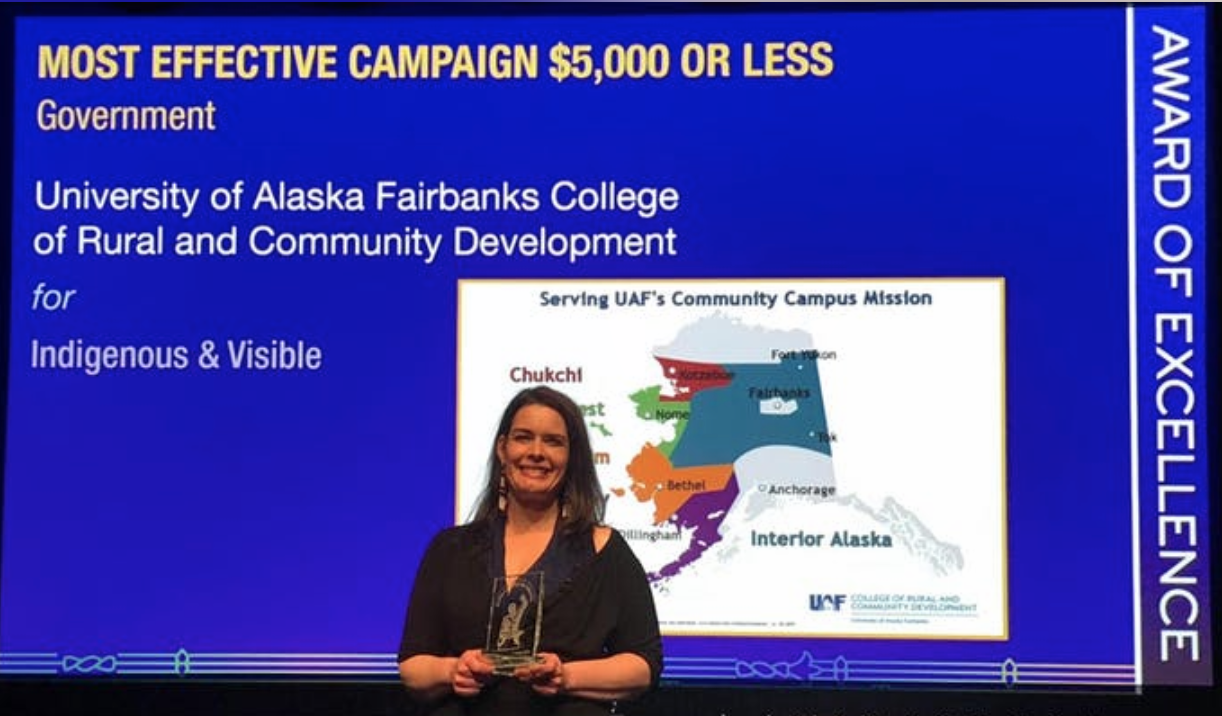 Join PRSA Alaska in Fairbanks for a behind the scenes look at “Indigenous Visible,” a public relations campaign by the UAF College of Rural and Community Development. This campaign won a 2019 Silver Anvil Award of Excellence in the government section of the “Most Effective Campaign on a Budget $5,000 or Less” category. The award was presented by the Public Relations Society of America in New York City in June. In this presentation, Long will share her progression from winning an honorable mention award to a Silver Anvil Award of Excellence.

Long’s public relations campaigns were the first PR effort for UAF’s rural campuses and Alaska Native programs. Her campaign promoted UAF’s rural campuses and Alaska Native programs by sharing positive stories about Alaska’s Indigenous peoples. Her strategy rested on the idea that a public relations campaign sharing the success and accomplishments of CRCD’s programs and rural community campuses should be culturally relevant and should clearly articulate the social return on investment. The campaign included public relations efforts from June 2017-February 2019.

In this presentation you will learn:

Leona Long is the manager of news & content for the University of Alaska System Office of Public Affairs. She is also half of the public relations effort in Alaska for MOLLY OF DENALI. Before moving to Alaska, she interned at three LA television stations and worked for a health care public relations agency in Los Angeles. As a lead writer for Long Beach Magazine, Long wrote cover stories about Cameron Diaz, Snoop Dogg and Billie Jean King.

Long has donated more than 300 hours of pro bono public relations counsel and tactics to Interior Alaska Native villages. Her work ensured that Beaver’s Cruikshank School stayed open after losing state funding in December 2015. Her media relations strategies gave Allakaket a voice to defend their traditional way of life and take a public stand against methamphetamine. She was a plenary session on the first day of the 2016 Elders and Youth Conference and presented at 2016 First Alaskans Racial Equity Conference. Long also writes for First Alaskans magazine. For more, visit www.leonalong.com.